Disrespect to Matthew lillard and George clooney for sending me takedown notices about torrenting their crappy sophomoric drivel. i don’t normal mention things i hate(or at least i’m trying to do so less). but, for idtorrentthat we might need to make an exception. there are ways to avoid this:

used to be avoiding big releases would help but no longer

you can get VPN access. be careful who you use as they may have a policy of turning over your ip when asked. also, count on speeds being limited even though they advertise unlimited. If what you’re getting is “free” you are the product being sold

there is still usenet but it’s become much less functional in recent months. releases are becoming incomplete after a few hours because you know DMCA. try and go with a dutch server like maybe tweaknews?

remember if you do get a takedown notice with links to a site like https://www.copyrightsettlements.com/ or http://www.respectcopyrights.org/ don’t click on it! if you think life sucks when you get harassing emails and maybe a temporary suspension of internet access just know: IT WILL ONLY GET WORSE IF YOU GIVE COPYRIGHT LAWYERS ANY INFORMATION IDENTIFYING YOURSELF.

Superhero movies are always popular and lately abundant.  And the question is so often asked, why?  Is it because we as humans so often feel powerless?  We often imagine God or some magical comic book character coming along to “save the day” as if there were simple answers to complex issues that dog us at every turn.  But, if we knew what life was worth we would seek our Heaven on Earth.  Most research into art effecting life has show that art reflects life, not the other way around.  At best, the arts can inspire individuals.

My siblings and I would often stare into the sky as children.  I can’t help but think that we were (and still are) like babies in a crib looking for someone to come along and lift us up out of our miserable existence.  *sigh* But, it has become apparent in the last 30 years or so that no one is coming to save us.  We must become our own superheroes.

I have composed here an incomplete list of films that point in that direction.  Experimenting with a simpler, less youtube based format here, fo the sake of all the clutter.  As always, your comments and suggestions are welcome.

Superheroes
These guys are vigilantes at worst, mildly misguided philanthropists at best.  If you’re a voyeur who actually glances at reality TV or even mentions celeb gossip in passing you are bound to enjoy this actually unscripted still interesting documentary.

Super
How about that rape scene?  I mean srsly Juno, why you gotta rape Dwight so hard?  that’s just wrong.  If that gave me an erection, what does it say about me?

Defendor
Deepest role I’ve ever seen Woody play.  Couldn’t stop laughing at this very serious film that delves into the way archetypes are used to redefine situations so that ppl can understand them better, and how much can be misinterpreted within that process.

Inseparable
Most asian films get an absurdly high rating on IMDB because their countrymen vot them up for patriotism.  This one actually deserves it.

Alter Egos
As does this one.

The Message
Best propaganda of the 21st century, so far.

Life of Pi
First half is way too preachy and up its own ass.  Secound half redeems.

Beasts of the Southern Wild
Hushpuppy might be the greatest hero of them all.

CYANLIANAS is on mars or something.  So, it has befallen me the great duty to remind you all that the great Satan and card carrying socialist is trying to steal your internet and run it through the central firewall down at the polit bureau.  Or something like that.

Starting December 3, the world’s governments will meet behind closed doors to discuss the future of the internet. Some governments want to use this meeting to increase censorship and regulate the Internet.

Learn more about what’s at stake at the International Telecommunication Union (ITU):

IDK what they’re gonna come up with next, five-letter acronyms?  six? seven?  dood we’ve gotta get up on this.  You see that IDL logo on the left?  thats not just some bullshit we put up because it looks cool…. okay maybe that was part of why we put that there but ummm…

It seems that anytime anyone tries to take a reasonable stance on the issue of copyright and how it’s original intent has been distorted by corporate interests, it gets buried.

Anyway, expect to continue to see lots more posts and annoying ass spam on your facebook and shit as this whole thing progresses all over again.  The Illuminati don’t take the holidays off from oppressing us, so, we don’t take them off to stop bitching about it.

We’re all watching Homeland and The Walking Dead. But in case you haven’t noticed, I’m all about letting you, dear reader, know about interesting things you haven’t seen or heard of, yet.

Oliver Stone’s new project, The Untold History of the United States, is a ten hour long documentary about the history of these United States.  It’s not something that pretends to be anything else, and, that’s what i like most.  Expect to sit and hear Mr. Stone narrate over old black and white video and photos.  It’s kind of like how PBS or History channel used to be, in the before time long long ago.  It will only be as exciting as a great lecture on history can be, which I find extremely stimulating.

There is no 3D dinosaur killing robots.  No actors doing historical reenactment to make history more exciting.  If the story of the world being told by an old man in a way that makes people appear to be a little bit more complicated than two dimensional cardboard cutouts cannot hold your attention, then you are what is wrong with the world.

Some criticism of the series has surfaced.  I guess we can’t expect too much from the maker of such historically perfeck films as JFK or Natural Born Killers.  I’m still trying to watch the whole series anyway.  i like it.  noone seems to be capping and releasing it much but that’s sure to change.  i mean, they gotta release it on DVD and then that’s bound to get ripped, amiright? hope so…

So after six weeks of absence I’m back. got a lot of lists for posts started up but just haven’t gotten around to posting with like words and stuff.  Coffee has changed my perspective slightly. You know sometimes you try to strike up a conversation with strangers in public and shit just doesn’t go as well as you’d hoped.  I’m not sure if no one understands me because I’m fucked up or because they’re fucked up or if the whole society as a whole is the culprit.  Thought I’d throw some titles about it out here right quick.

I am too awash in ennui to write anything.

http://thinkbeforeyoupink.org/  We know almost nothing about cancer in general.  Cancer is a lot more complicated than people would like to think.  even detecting breast cancer and treating it may very well be shortening the lives of women as a whole, but is certainly shortening the lives of individuals in the population, which isn’t to say you shouldn’t get a mamogram, but is to say that life can’t be boiled down into a 30 second sound bite.  No one knows where ‘the cure’ will come from.  But, We do know that buying pink crap, and walking en mas will not help.

why do we live the lives that we do?  eating the same boring food.  taking the same drugs.  buing the same crap, that we just throw away.  days turn into decades.  still, the same meaningless goals take priority over our lives.  Then one day, BAM! head injury.

Ahhhhh… cynical surrealism, how you comfort me so.

The far right and the far left have so much more in common than most people would admit.

Yo CYANLIANAS holler back!  Have you been watching anything?  Or, just drawing and writing?  Somebody write a comment about this!  Recommend further watching and books and articles and shit.

Firstly I’d like to thank the owner for letting me be a part of this.

Awesome new movie that’s hardly got any press. Have you ever wanted to see a middle-aged suicidal man become bestest best friends with a 13 year-old girl and then go on a cross country killing spree, like together, as a team? HAVE I GOT A MOVIE FOR YOU!

See the thing is

I WANT TO KILL PEOPLE

I WANT TO SMASH THEIR HEADS AND WATCH THEM BLEED

And, watching people kill other people on the screen makes me happy. Jhonen C. Vasquez wrote a lot of super anyltical smart guy crap that i don’t really neccessarily agree with in introductions to some of his releases of Johnny the Homicidal Maniac. But who cares about all that crap. Let’s talk muvee! 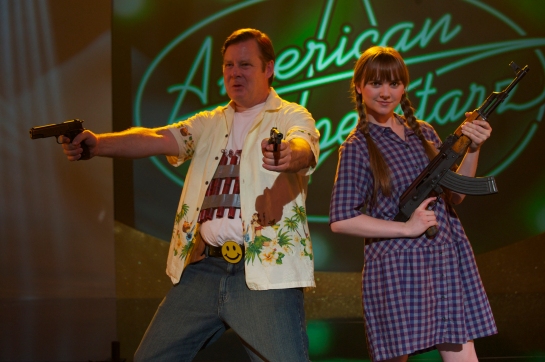 From the press package:

culture. Divorced, recently fired, and possibly terminally ill, Frank truly has nothing left
to live for. But instead of taking his own life, he buys a gun and decides to take out his
frustration on the cruelest, stupidest, most intolerant people he can imagine — starting
with some particularly odious reality television stars.

Frank finds an unusual accomplice in a high-school student named Roxy (Tara Lynne
Barr), who shares his sense of rage and disenfranchisement. Together they embark on a
nationwide assault on our country’s most irritating celebrities . . .

Written and Directed by taboo-busting filmmaker and comedian Bobcat Goldthwait
(Shakes the Clown, Sleeping Dogs Lie, World’s Greatest Dad), GOD BLESS
AMERICA is a truly dark and very funny comedy for anyone who’s had enough of the
dumbing down of our society.

Written and directed by Bobcat Goldthwait who i rly only think of as Mr. Floppy from Unhappily Ever After.  Apparently him and Jimmy Kimmel have some sort of semi scret homoerotic relationship going on.  Dude hasn’t worked without him for like at least a decade.  And, when did he get a haircut?  His voice still sounds distinctively like shit though so i guess there is that.

So, it has two of the elements of a great film; there is violence and fire.  But, not nearly enough sex.  Although there is sexual tension.  Two out of three!!

As a disclaimer, I do not condone the use of bittorrent and do not claim to use it myself.  ”I’d Torrent That,” is equivalent to “I’d Pay to See That.”